The country’s language and culture, much like his decision to sport that ponytail, are indecipherable and bewildering to outsiders, and the boho-chic ramshackle streets of its capital, Lisbon, have an off-peak charm that never quite fully manifests – yes, we’re alluding to that particular ill-fitting suit.

But just like its poorly-attired, all-singing no-dancing export, Lisbon is a hands-down winner.

The neat, wide boulevards and elegant squares of the city’s 18th century core, rebuilt after the devastating 1755 earthquake, tsunami and fire suggest a conventional European capital. But Lisbon defies such restrictive definitions.

The rambling tight spaces of the streets of Alfama, the hillside neighbourhood leading up from the city’s cathedral to the commanding Castelo de São Jorge, and the nooks and crannies of the Bairro Alto are both crammed with intrigue and variety in a style that feels strangely other for a country only two hours from home, with TAP Portugal soon to launch a flight from London City Airport.

While Lisbon by day is a tourist’s paradise of Instagrammable edifices and square-side cafés – Can the Can on the Praça do Comércio is alarmingly good, given the blatancy of its location – it’s as the sun hangs low that the city opens up. As the light dims and temperatures drop from sweltering daytime highs, streets and alleys throng with charged masses of Alfacinhas (the Portuguese nickname for Lisboetas, which literally means little lettuces) after one thing – a solid aperitif. Vinho Verde – literally ‘green wine’, but actually just young wine – is Portugal’s crowning achievement.

Though the delightfully muddled ensemble of alleys and boulevards in the city’s core offer plenty of watering holes, it’s worth heading up the hill to the Sky Bar at Hotel Tivoli, which offers a rooftop perch over the city for perfectly mixed cocktails, stylishly uniformed service, and a vibe halfway between soft lounge and house that just works. And the view’s spectacular.

For dinner try a traditional Portuguese taverna. Restaurante Gambrinus is a star of its genre. Genteel waiters serve devastatingly good seafood fare – all as fresh as you’d expect – with a commendable knack for culinary theatre. 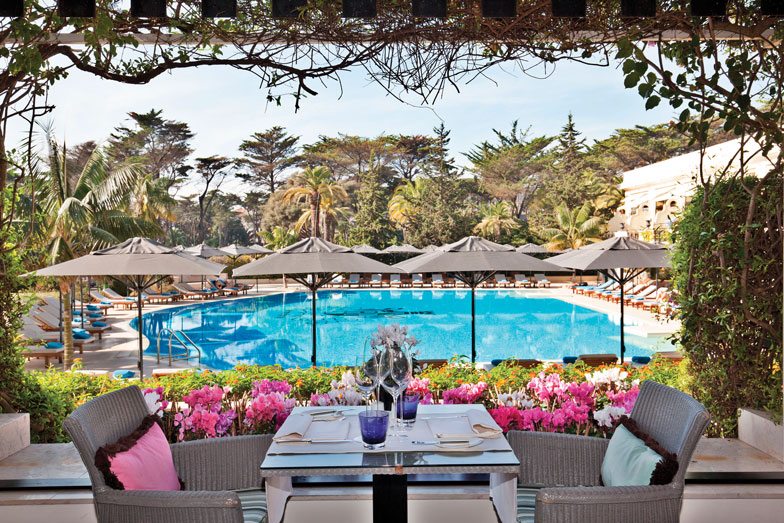 And then there’s Lisbon’s surprisingly vibrant gay scene, given that this is a this fastidiously Catholic country. Gay bars are clustered in the Bairro Alto, with Clube da Esquina, Side Bar, Shelter, and CRU all names to look out for. Hardcore visitors can follow that up with a turn at Construction, Trumps, or Finalmente clubs, the last of which closes its doors to bleary-eyed hedonists at 6am. For a more mainstream experience, dip into any Fado bar on performing nights to sample the national musical dish – a gorgeous, crooning, emotional singer-and-guitar style that sits somewhere between Édith Piaf, yodelling, and banjo music.

Even more charm can be found beyond Lisbon, sprinkled artistically along the coast – known as the Riviera Portuguesa – out towards the Atlantic and Europe’s westernmost fringe.

Belém, from the Portuguese for Bethlehem, harbours both the ancient Torre de Belém and Mosteiro dos Jerónimos – classic examples of the distinctive Manueline architectural style – alongside modern monuments such as the Padrão dos Descobrimentos, built during Portugal’s dictatorship.

If you fail to drop into Pastéis de Belém, rip up your passport because you shouldn’t be allowed to travel. Pastéis de Belém’s menu has only one item: the eponymous creamy, silky, flaky, crisp egg tarts, the recipe for which was invented at the monastery next door. We’d fly out for a day trip just to spend hours eating plate after plate.

Sintra, a few miles inland, is wonderland for history and architecture lovers, and people who just like pretty things. The sheer density of royal palaces here is impressive, but the Palácio da Pena is the best, compounding a 16th century monastery with a 19th century pastiche of Manueline, Mogul and Arabic styles. The result is astounding, and deservedly Portugal’s most popular attraction. 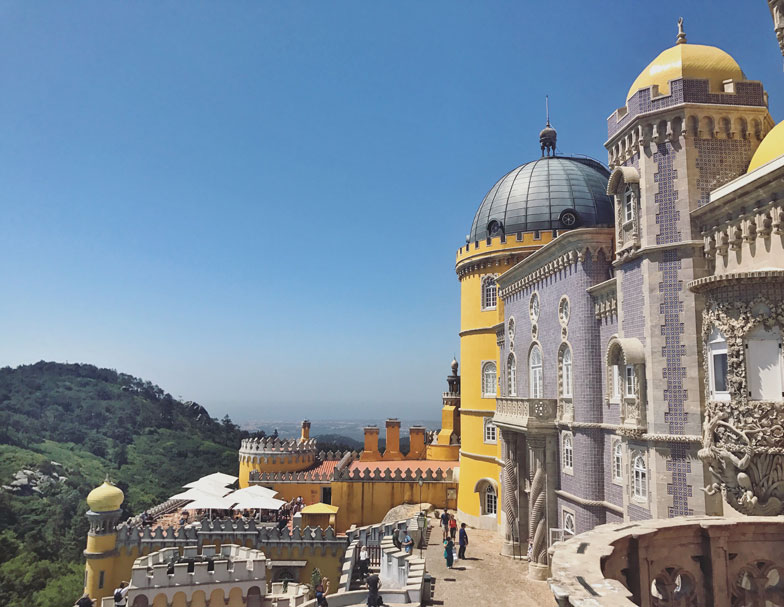 Cascais, the last cove before the open Atlantic, is a former fishing village turned chic, glamorous resort town with a tight-knit centre of glamorous shops and street side cafés. The beaches along this stretch of coast are glorious, and a pristine boardwalk links most of them for an excellent stroll. Hidden away in a suburb is the Conceito Food Store, a delightfully small restaurant serving jarringly good food.

But Estoril has the more salacious reputation. The Casino Estoril, at the town’s heart, is Europe’s largest, and is fabled as a rendezvous for spies during World War Two. We stayed at the Palácio Estoril, a classic hotel that has been a favourite of European royals incumbent and deposed since its opening in the 1930s. Author Ian Fleming was inspired to write Casino Royale, the first Bond book, during a stay among the British and German spies who frequented the Palácio, and On Her Majesty’s Secret Service was filmed here in 1968.

These days, it clings onto that old-world charm and deference while surrendering to the needs of a modern hotel: waiters dressed a little like Napoleonic infantrymen serve cocktails beside the crystal-blue pool as you surf the exceptionally fast Wi-Fi, and an unusual underground corridor leads from the carpeted sumptuousness of the hotel to the Asian-inspired Banyan Tree spa.

And though the feel of the place – with its almost egregiously sumptuous mahogany-toned bar and chattering-class-friendly breakfast saloon – can feel a little antiquated for a 21st-century sun-and-pool holiday, its charm is absolutely undeniable. Service is flawless, upkeep exemplary, and the food and wine in the hotel’s two restaurants are top-notch.

Lisbon – elegant, chaotic, and enchanting all at once – is a heady and intoxicating thrill. But it’s also worth having the distance from the pulsing city, with its passion and energy, to sink into the more relaxed, refined expanses of the Riviera Portuguesa. Portugal’s is a culture that prides itself on its otherness; not Spanish, not Mediterranean, not within the usual spheres of travel – and it’s all the more rewarding for it.

Nightlife in Lisbon starts very late. People start going out to bars around midnight and clubs around 2 to 3am. The popular gay nightlife spots in Lisbon are locatd in both Principe Real and Bairro Alto. You can still drink on the streets in Lisbon and many locals crowd the streets in this popular area. The gays tend to hang out on Rua Barraco between Rua das Salgadeiras and Travessa dos Fiéis de Deus.

Purex – mixed crowd with both gays and lesbians and the occasional straight couples or friends. It’s a great spot in Lisbon to go for a few drinks and perhaps a quick dance on the small dance floor. The interior has an edgy decor, yet still very cosy and laid-back. It’s technically a gay-friendly bar and very popular with the artistic, alternative and fashionable crowd. Probably the most popular bar for lesbians. Address: Rua das Salgadeiras 28 1200-241

Tr3s – probably the most popular bear bar in Lisbon with happy hour from 4pm to 10pm. They offer a variety of drinks including both Portuguese and Belgian beers. There’s outdoor seating and it opens as early as 4pm. Address: Rua Ruben A. Leitão 2A, 1200-392

Setimo Ceu – friendly bar in the heart of Bairro Alto off of Rua Barraco – where all the gays hang out on the street drinking. Friendly staff and a good place for cocktails including mojitos, caipirinhas and caipiroskas. Open since 1996. Address: Travessa da Espera, 54-54A, 1200

Gay Clubs and Parties in Lisbon

Trumps – this is the largest gay club in Lisbon and one of the most popular. There are two separate dance floors – one plays house while the other pop. All ages and types go and are welcome but it tends to trend on the younger side. Trumps is the creator of Hot Season and the Hot Season Festival, the first international gay festival in Portugal. Entrance costs 10€ which includes one drink ticket. Open Fridays, Saturdays and any night before a bank holiday from 11:45pm until 6am. Address: Rua da Imprensa Nacional, 104 B, 1250-127 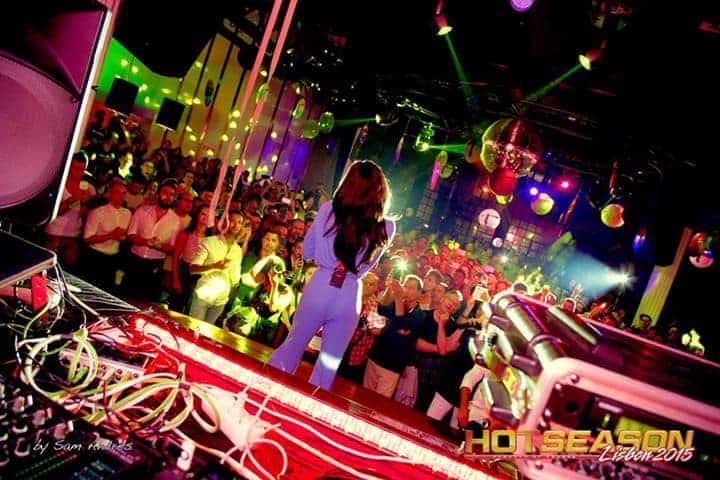 Construction – a large club located in the Principe Real neighborhood. This space is very popular with bears, masculine guys and older crowds. You’ll find three different floors with the top floor occupied by a very cruisy dark room. It gets busy around 2 or 3am and plays house music. Open Friday and Saturdays – midnight to 06:00am. Address: Rua Cecílio de Sousa, 84, 1200-277

Finalmente Club – one of the most popular and classic clubs in Lisbon and the only one open during the week. It’s a small dance club and institution in town open for more than 35 years featuring popular drag shows. Open every day starting at 12:30am until 6am with shows starting at 3am.  Address: R. da Palmeira, 38 r/c – 1200-313

Conga Club – this is a monthly gay party that rotates venues. These parties have become a major LGBT event in Lisbon’s nightlife. It tends to be a more alternative crowd with good music ranging from alternative retro pop to commercial hits. Check the Facebook page for dates and locations.